My Father-in-Law gave me his dad’s old Mercury II camera a couple of years. His dad, John, bought this camera while serving in the US Navy in the late 1940s; it has his initials, serial number, and “USN” engraved on the camera. This one is a little more sophisticated than other vintage cameras I have used, but luckily I found a manual by doing a simple Google search.

I’ve had a fascination with using old cameras for a while. I’ve bought other vintage Kodak cameras that take 620 film (not something you can just go buy in the store). With this camera I can easily pick up a roll of 35mm film, load, and shoot. What is really interesting about it is that the photos are taken in half frames–two photos are taken in one frame of the film.

I’ve been snapping some pictures for that last two years, and I finally got the roll developed. That’s what I find so exciting about film cameras. We are so used to taking a photo with our phones and being able to look at it right away. I enjoy the surprise and anticipation of how it turns out. Before I take a picture I have to properly adjust the shutter speed, aperture, and focus. Which is pretty  much my best guess based off of the gauge on the back of the camera. Check out a few of my photos. Disclaimer– I sent this out to be developed through a Walgreens. I am guessing that I should have made a note that these were half frames. When I got the pictures back a lot of pictures were cut off. It was sort of disappointing, but now I know better for next time.

My niece playing in the snow.

Oshkosh after a blizzard

back yard after snowstorm 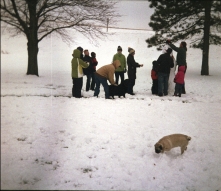 Do you enjoy using a vintage camera? What do you shoot with?

I wonder if any of the mills in #Oshkosh had #AllisChalmers sawmill machinery? #HistoryMystery #oshkoshhistory #mke #CreamCityMachineryInSawDustCity