Our D-10 was the 4th and most recent restoration job that we worked on. I had done some various work on it in it before the painting part of the project. My brother and I took the head off, only because the head gasket went out, and had the head gone over and honed the piston sleeves before we put it all back together. There used to be a Woods 5′ mower deck mounted under it, and we used it for mowing the acres of grass on our farms. This made a great mower because this model has an independent PTO on it, unlike earlier models.

I believed we bought this tractor in the winter of 2007. It was at a small restoration shop in a town up the road from us. It was in pretty rough shape when we got it. I can’t remember what the price tag was on it, but we ended up trading in our Allis-Chalmers CA and paying couple hundred dollars yet for this tractor. There is a story about my Allis-Chalmers CA as it relates to the D-10, but I will cover later.

We used the mower in the condition it was in for 2 years.  We were having issues with the rear axle seals leaking and the brakes didn’t work as a result of it (oil was dripping on the pads and wouldn’t grip). So I initially tore that all apart and put some installed new seals in Fall 2009. That took care of the leaking issue and the break issue. In Spring 2010 we started taking the tractor all apart and prepping the metal for paint. We didn’t have any mechanical issues to fix, because I had addressed those the previous year.

By the end of that summer, we had the tractor painted and back together. The only thing we are missing yet, which we didn’t have to begin with, is the snap coupler mechanism for the drawbar. We have actually looked into putting an aftermarket 3pt hitch on, that might make it a little more useful.

The D-10 is a super-sweet little tractor. We would like to get its twin sister, the D-12, and have them both fixed up together. They are fun to putter around with and take out for photo ops every now and then. 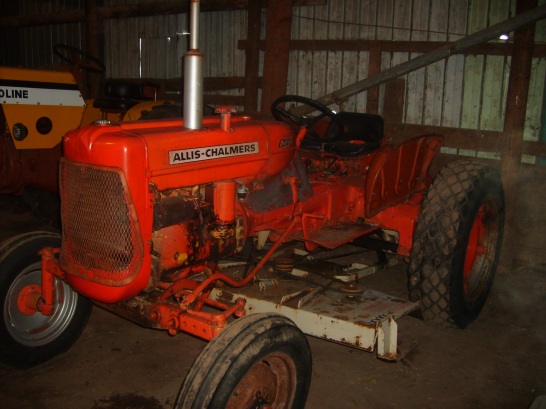 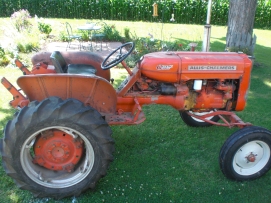 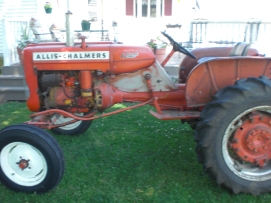 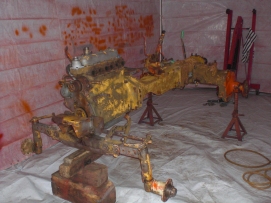 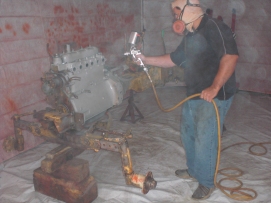 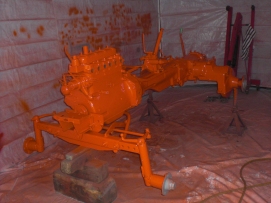 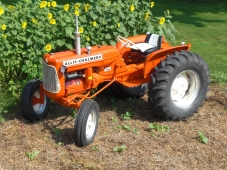 In 2006, my dad, brother and I decided to take up a new hobby. Dad thought that getting some old tractors and machinery might be fun, and we could use them to make some small food plots near our woods. He bought a 1962 Allis-Chalmers D-17 Series II and, although we never really intended to, we started to restore her. I was 15 years old at that time, and since then we’ve restored several Allis-Chalmers tractors and implements.

Dad bought this 1963 Allis-Chalmers D-19 gas tractor for $1,500 in 2007. The seller said that it was actually a combination of two D-19s that were put together to make one. The tractor was a great deal, but it needed a great deal of work. The rear main seal leaked, the power-director jumped out of high range, the PTO seal leaked badly, and the transmission needed some attention.

We moved the D-19 in the shop right after we finished our D-17. The first thing that we tackled was the transmission. The main pinion bearing was out, and it was making noises and metal filings were in the oil. Getting to this area of the tractor meant a complete tear-down of the transmission housing, which is something that most tractor owners cringe when they hear, but not us.

The most agonizing part of fixing the D-19 was removing the rear hubs from the axles. It took two weeks of torching them till they were cherry red and then hammering on them until they freed up. After we managed to get them off, it took us no time at all to get the transmission apart, fix it and put it back together again. The other issues were a quick fix, seeing as we had the opportunity to fix them on the D-17 prior tackling the D-19.

The last major problem we encountered was that the tractor had no oil pressure, as the rear main seal was worn out. We discovered the problem when we were working the tractor on our farm and engine oil started pouring out of the clutch inspection hole in torque tube. We ended up splitting the tractor again, after the restoration, in the same spot to replace the two seals for the clutch shaft. We learned after that to replace any seal we see when fixing a tractor.

In spring 2008, it was time to get really dirty. My job was to sand blast the entire tractor and all the sheet metal. For anyone that has done this job, you know how labor intense and dirty it really is. I had to be very careful not to get sand in any of the new seals or other areas where the sand could damage moving parts. To do this I used plastic bags and duct taped them to ensure a seal around the critical areas. It took a lot of hours and a lot of sand to get the tractor blasted, but getting the old paint and rust off would ensure a fabulous paint job. The next step was to prime and put the persian orange #2 paint on her.

For our painting booth, dad bought a car port and set it up in our shop with cut pieces of silo bags on the floor inside. We painted the main tractor and wheels first then got it out of the booth. We then built a rack to hold the smaller parts. My brother sprayed the fenders, hoods and all the other smaller stuff. When he finished painting, we could just disassemble the car port, box it up and store it until the next project we had.

We put the final touches on the D-19 in september 2008. This was when the tractor got decals, gauges and a new wiring harness. As we pulled it out of the shed for the first time, the tractor looked like brand new. A lot of the cosmetic parts that went into this tractor were bought from Steiner Tractor Parts. They offer a wide range of products for hobbyists restoring these old machines.

At that time our line-up consisted of a D-10, D-14, D-15, D-17 and this D-19. After the D-19 we restored our D-14 and D-10. We did a few custom jobs on the side after that including a Minneapolis-Moline Jet Star 2 and a Farmall H. The D-17 and D-19 were recently sold and replaced with a 190XT Series III and an Allis-Chalmers 440. We really enjoy collecting and restoring these old machines and the best part is using them after they are all fixed and repainted. Collecting old farm equipment has been a really good father-and-sons project for us. 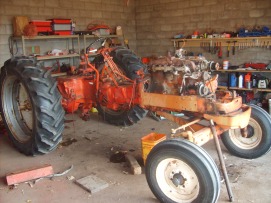 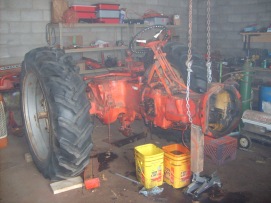 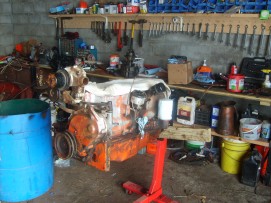 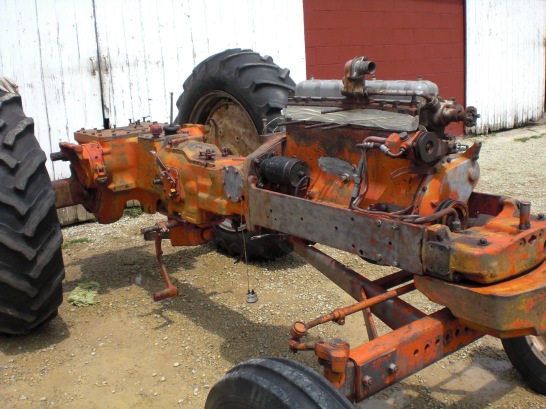 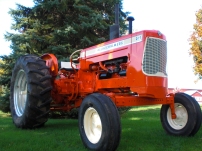 The D-14 was the third Allis-Chalmers tractor project we undertook. We bought this tractor as a package deal with the CA in the Spring of 2007. I think this was a 1 owner tractor. It ran sort of rough when we bought it. The engine needed an overhaul, and their were some issues with 2nd and 4th gear. We started tearing this tractor down Fall 2008. we did the mechanical stuff over the winter months. We overhauled the engine, fixed the transmission, installed new breaks, and we did some various other patching up. I remember we had some problems when we put the engine all back together and tried a test run to check and make sure our fixes worked. The transmission was working well. All the gears went in, and all the gears stayed in. The engine was blowing white smoke, and we couldn’t figure out why. Turns out the antifreeze was getting into the pistons. We thought maybe it could be a faulty head gasket. We took the head off, put a new head gasket on and same problem. So we began trouble shooting. Finally we figured it out ( we should have known ). We ran the engine for a while, shut it off, then we tightened the head bolts down some more (like you are supposed to do). That took care of the problem. We then took the tractor apart again to prepare for painting. We finished up with the paint by the end of the that summer in 2009.

This is one of my favorite little tractors, unfortunately we are having issues with the engine again. When we start it, it runs fine, but once we shut it off and try to turn it back on it doesn’t turn over. We are going to take the tractor in and have the engine looked over again this winter. Hopefully it will be ready to go for next summer when we plant our popcorn. 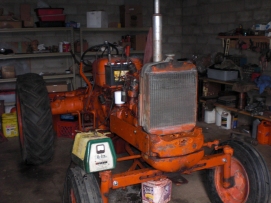 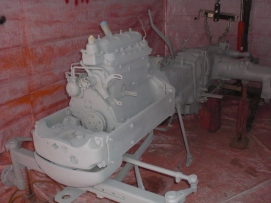 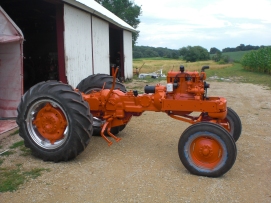 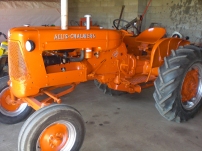 My Great Uncle has a MM Jet Star II that he wanted fixed and repainted. He had seen the work we did, so he asked us if we would be interested in tackling a non-orange project. We took on this project along with our D-10 in the 2010. We had some mechanical issues to resolve for him. The rear axle seals leaked and needed to be replaced. A lot of the hoses on it leaked and needed to be replaced as well. Once we had those issues fixed, we sandblasted and stripped all the paint off, primed, and painted. We originally ordered paint called MM Yellow, but it just didn’t look right. We did some research and found that we need to use Power Yellow. He also had an aftermarket loader and bucket on the tractor, so we painted that brown and black to go along with the tractor paint scheme. Overall, this tractor turned out great. Uncle Howard liked it, and his son took it to a couple of shows. 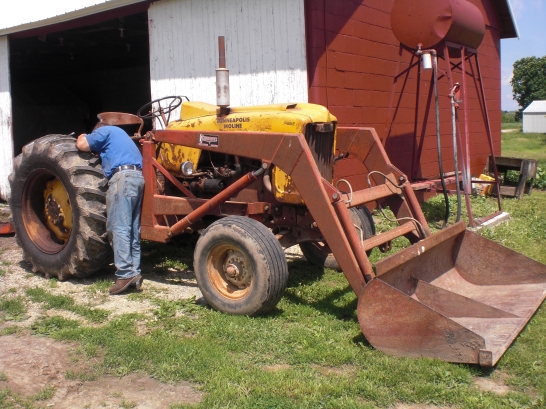 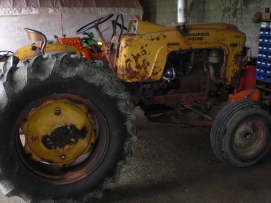 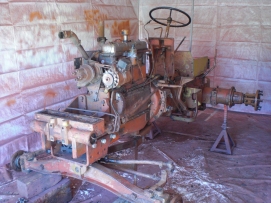 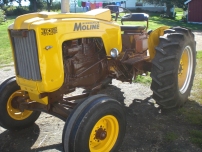 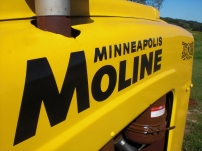 #AllisChalmers #D14 #tractor near the end of the assembly line at the #WestAllis Works. #Milwaukee #Wisconsin #History #Manufacturing #Agriculture