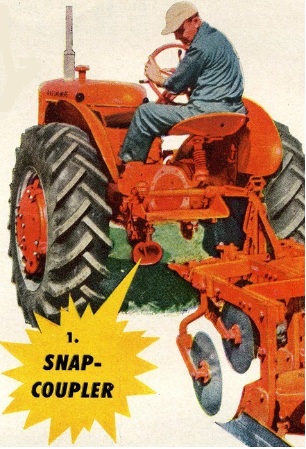 In the 1940s and 1950s farm equipment manufacturers began designing brand specific hitching systems that allowed implements to be mounted directly to the tractor for transporting.  Allis-Chalmers developed a hitching mechanism it trademarked Snap-Coupler. The system was as simple as backing the tractor up to the tongue of the implement until the large hook mounted under the tractor locked, or snapped  the implement into place. 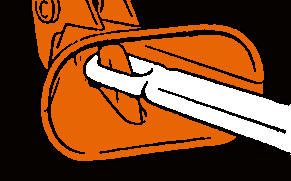 The Snap-Coupler hitch system was invented by La Crosse Works Chief Engineer Willard H. Tanke. He filed his patent for the  mechanism on August 13, 1953. Allis-Chalmers tractors previously had a single-point hitching system, but it was difficult for the operator to line up the tongue of the implement under the tractor. Tanke’s design had a funnel like guide, called the bell, with a single, spring-loaded hook. The tongue of the implement resemble the eye of a needle, which would be hooked into the bell. Lift arms on the implement would be hooked into the Snap-Coupler latches on the tractor’s lift arms. (See full patent here)

Hooking up to the implement

Snap-Coupler Bell that hangs under the tractor

Allis-Chalmers introduced its new Snap-Coupler hitching system on its tractors in 1954. The company also began marketing a variety of implements that could be mounted on tractors. Tilling, planting, and forage implements came in a variety of sizes to match tractor horsepower. A hydraulic control system called Traction Booster was also integrated with this hitch system. This hydraulic system controlled tire traction when the implement was in the ground by lifting and lowering the implement automatically. 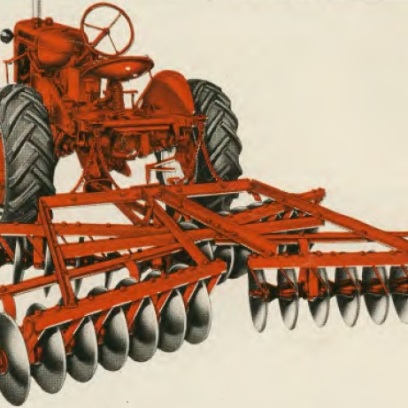 The Snap-Coupler hitch system continued to be standard equipment on Allis-Chalmers tractors through the 1950s. Beginning in the 1960s, tractors had the option of being equipped with the more universal 3 point hitch system. By the late 1960s, Allis-Chalmers abandoned the Snap-Coupler system because farm equipment manufacturers began to standardize to the 3 point design. A few other factors that led to the demise of Snap-Coupler was that it became increasingly difficult to adapt the hitching system to the larger tractors that were entering the market. Snap-Coupler implements were built by Allis-Chalmers for Allis-Chalmers tractors, so it limited the farmer to one brand. The 3 point systems being considered versatile, safe, and easy to use is what made it the choice of farm equipment manufacturers when standardization took.

There are still quite a few Snap-Coupler implements left out there, and a lot of AC collectors use them. This blogger has some old Snap-Coupler machinery that he uses from time to time. If you have a Snap-Coupler hook up on your tractor that needs repair check out DJS Tractor Parts or your local AGCO dealer.

The railroads were once the arteries of our nation. They moved raw materials, finished goods, livestock, mail, and people to and from. My hometown of #Markesan , #Wisconsin reaped the rewards of a railroad connection. What a priceless treasure that the #MarkesanHistoricalSociety was able to save and showcase this important part of that city’s past. #railroadhistoryofamerica #milwaukeeroad #trains #WisconsinHistory