Until moving to Oshkosh a few years ago, I never realized how industrial this city used to be. From what I have been told, Oshkosh was considered the second city in Wisconsin,  behind Milwaukee. Dominated by the lumber industry, the shores of the Fox River were packed with mills and other industrial firms.  Three major railroad lines ran through the city and serviced many firms that built next to its tracks. But, like Milwaukee, hard times hit Oshkosh and businesses closed or moved out.

The urban landscape of Oshkosh has changed and continues to change.The mills that crowded the shores of the Fox River have been demolished to make room for parks, university buildings, or turned into luxury condominiums. Old railroad lines through town have disappeared or turned into hiking trails. Formal industrial firms stand hollow along what used to be these railroad lines. Traveling down Harrison Street will bring you past a few of these former industrial buildings; one of them still has its name engraved in a cement header: “Universal Motor Company.”

The history of the company dates back to 1898 when E.H. Fahrney built and patented his marine motor. He owned a summer home in Oshkosh, and enjoyed boating on Lake Winnebago. He organized a motor company with Louis Monahan and John Termaat in Oshkosh. The company went through a few names, but was reorganized as the Universal Motor Company in 1913, which built marine motors, industrial engines, and generators in Oshkosh. The company originally started in a building on Ceape Street, but had to build a larger plant on Harrison Street to increase production.

For a more thorough history of the firm and its products, click here. 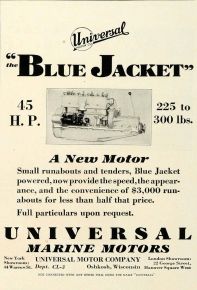 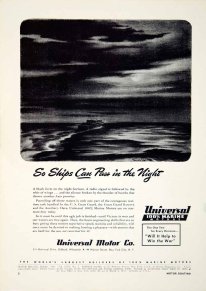 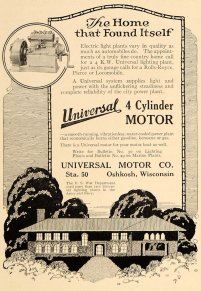 I am not sure whether the building is still in use anymore. The firm was acquired by Westerbeke in the 90s, and company operations moved to the parent plant in Massachusetts. It looks like there have been some additions to the building, and there is still a mailbox at the address.