If you have visited the Unofficial Allis-Chalmers Forum you know people post a lot of good content on there. A thread I have been following this past year and a half is a 782 Forage Harvester restoration that a guy has been working on. Micheal has been restoring his chopper for that last 4 years.  The project started off with the machine itself being repaired and restored and turned into restoring a two-row corn head for it.

He said the projected started in 2009 when he noticed oil dripping from the feed-roll gear box. He had been using the chopper to fill silos on his farm, so he kept adding oil to the gear box to get by. He decided to take the gear box off and have it repaired. Some other minor fixes eventually led him to overhaul the whole machine “all because the last owner did not seem to know how important a grease gun was.” The lower feed roll shaft was very loose, and upon inspection,  he determined the roller bearings had long been seized. This work led to more inspection and more issues.

Without knowing the feed roll shafts are splined and removable from the feed rollers it seemed I had to take the entire side of the chopper off to get the feed rolls out. This also meant pulling the cylinder and as long as I was doing that I should look into the drive line over-running clutch. The main PTO gearbox was leaking from the front seal so I should probably have that fixed…oh and as long as I am this far I should probably look at the PTO shaft U-joints. It also seemed a shame to take that much apart without doing some “minor” painting. I think you can see how things progressed. So after much deliberation with the machine half torn down I decided to do a full restoration. How hard could it be right? It is only a chopper and not as complicated as a tractor? 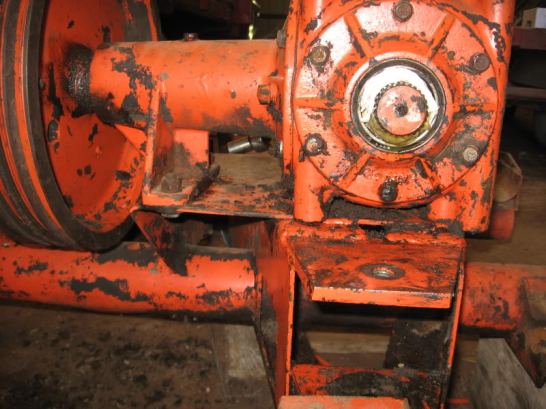 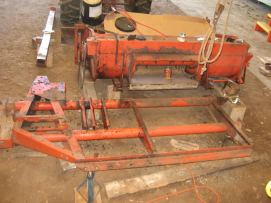 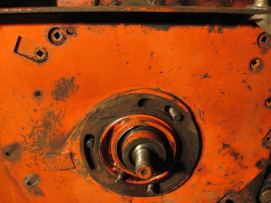 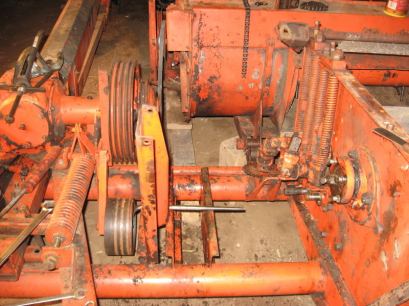 Michael’s optimism was soon put to the test. He ran into some challenges repairing the machine. One of the first challenges was getting the cutter cylinder out. He tried a few methods to move the cylinder, but it remained stubborn. Finally, with the help from a work friend, he rigged up an old chisel to a pneumatic hammer that successfully forced the cylinder out. The splined shafts on the feed roll were badly rusted, and those parts are no longer available. He turned to a local machine shop to make new ones from scratch. Michael also had some issues  finding the correct bearings, as they are no longer available. Luckily, he managed to find a pair of new old stock (NOS) bearings at a dealership.

Originally I thought I would take the major pieces off the machine, put the wheels back on and pull the carcass to the blaster/painter, but before I knew it I had it stripped down to the bare frame. Did you know you can fit an entire chopper in the back of an 8′ pickup truck bed when it is in pieces?

Michael seems to have learned a lot from this project. The best word of advice he has for those interested in this kind of  project like is documentation. “When I started the project I thought I was only working on three items,” he said, “so I did not take any disassembly notes.” He started taking notes in the middle of the restoration, but things he did not document proved to be a challenge later. He suggests taking pictures and writing down all the measurements take can be taken. Another useful tool for him was getting a hold of a parts book that shows how parts go together. After much time and patience, he finally got the machine up and running in summer 2011. 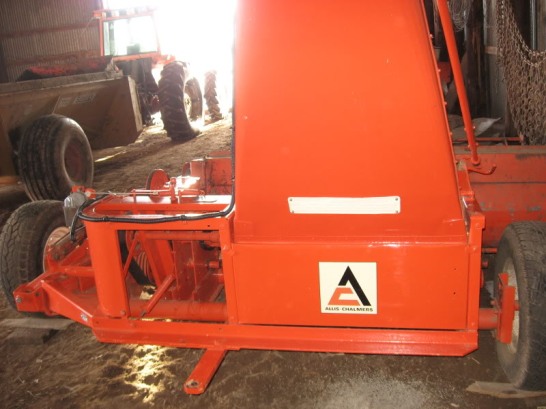 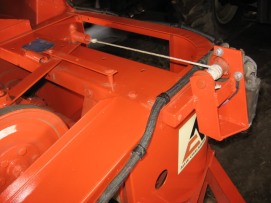 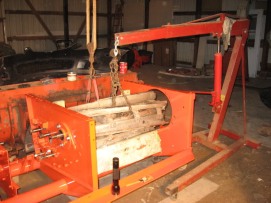 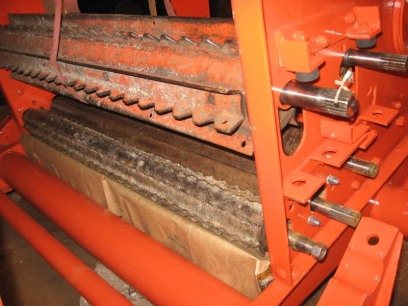 His most recent project involved finding a two-row, narrow corn head for the chopper.  Michael located a corn head he had been looking for in Michigan, but the owner would only sell the unit as a whole. Michael took a Lake Michigan ferry to Central Michigan to bring the chopper back into Wisconsin. The head was not used very much, but it did have issues from sitting out in the elements for thirty plus years. Bearings were out, the cutter bar was a wreck, and the sheet metal was rusted and banged up. He proceed to tear down the head, much like his chopper, to replace and repair broken parts. 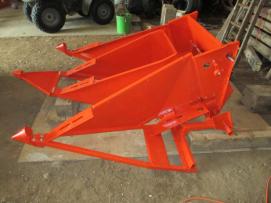 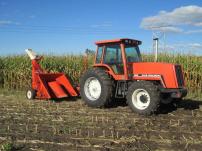 Michael had a lot of help getting the machine back up and running.  Manitowoc Motor Machining & Parts Inc. helped with making and setting all the obsolete moving parts the chopper needed. Schuette Manufacturing re-fabricated and fixed any rusted sheet-metal parts. Sandy Lake Implement helped located NOS parts in dealership inventories. Schaus Roofing & Mechanical helped him reproduce sheet metal for the corn head.  Michael also had help from friends on the Unofficial Allis-Chalmers Forum, who generously answered questions about the machine.

What are some hard restoration projects you have taken on? What kind of problems did you run into? How did the project turn out?

For more pictures of Michael’s restoration visit his Photobucket albums:

This song always reminds me of #BackToTheFuture2.