Who ever said work could not be fun?! I work for Winnebago County as a seasonal laborer, and one of the areas our crew has to maintain are the recreational trails in the county (Wiouwash and  Mascoutin). Both trails had previously been corridors  of the Milwaukee Road and Chicago & North Western railroads. They now serve as trails running throughout the county and into others. As you walk down the trails there are many remnants of their former railroad past. Pieces of rail, rail ties, spikes, and foundations of old signal towers are not uncommon. At one time these lines were alive with freight and passenger activity.

On the Mascoutin Trail there are a lot remnants of that railroad past. On the north end of the Winnebago County stretch of the trail (near the Winnebago/Green Lake County Line) there are the ruins of some sort of quarry operation. There is an old some sort of old kiln, along with other chutes and electrical equipment, laying in an area overgrown with trees and weeds. Next to what would have been the railroad is a large, stone retaining wall. There must have been chutes that were here that served as a gravity feed system into the railcars. I am still trying to investigate what the name of the company was that operated on this section of the line. Maybe someone from Berlin,Wisconsin, would know. 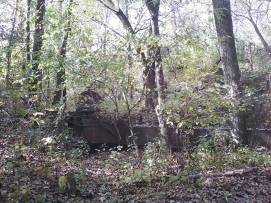 As I was mowing the part of the trail just north of Rush Lake I stopped to look at my mower that had plugged up. I noticed something lying amongst the brush. I thought it was a bottle that a litterbug just threw in the woods, so I picked it up. Then I saw the words “Thomas A. Edison” embossed on the bottle. I knew I had something. Besides the mold and dirt that had accumulated on it, the bottle was in great condition.

The bottle can hold 2 oz of battery oil and would have been sealed with a bottle cap. I did a little research on this bottle and discovered that these are commonly found along railroad lines. The signal boxes along the lines were battery powered, and this battery oil was added to prevent acid evaporation. When the batteries were serviced, the railroad workers threw the bottle to the side.

The bottle is not a million dollar collectible, but it is very intriguing. I am thrilled to able to hold a piece of railroad history that kept our trains moving. It will have a spot on my shelf as a fascinating conversation item. It makes work much more exciting when you can tie your life’s passion in with it.

What kind of exciting historical place/items have you come across at your job?

1 thought on “History at Work”