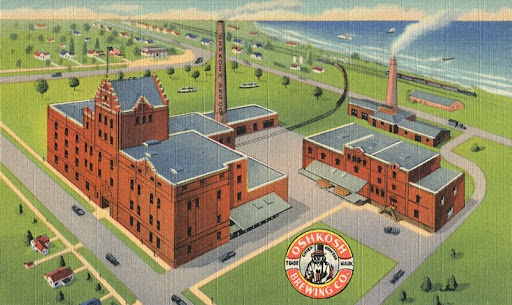 The Oshkosh Brewing Company was a brewery formally headquartered in my college town of Oshkosh, Wisconsin. It was only until recently that I learned of this brewery and began to uncover some of the company’s history. Sadly, the old brewery fell victim to the wrecking ball in 1986 destroying the physical evidence of the company’s existence. Only one of the smaller brick buildings remains on the old Oshkosh Brewing Company grounds on Doty Street in Oshkosh. A big shed now sits were the original brick structure once stood.

The Oshkosh Brewing Company was formally started in 1894 when three breweries in Oshkosh merged together. The breweries involved in the merger were; Brooklyn Brewery, Union Brewery. and the Gambrinus Brewery. The merger was the result of tough economic times that came out of a financial depression a year earlier. Another push factor was competition moving in from Milwaukee. Pabst Brewing Company and Joseph Schlitz Brewing Company were both moving their products up to the beer drinkers in Oshkosh. Carloads of beer from Milwaukee breweries made their way to beer halls in Oshkosh and the local brewers were struggling to compete. The proprietors of those breweries met in the courthouse in Oshkosh in the spring of 1894 to officially merge their breweries together and form one strong brewing entity.

The men who merged their beer brewing company’s together wanted to keep the merger under the radar. On the official document that made the merger legal, the phrase “do not print” was written at the top to prevent the newspapers from leaking the information out. Their attempts to secretly create a new brewery could not be kept secret and soon everyone knew of the Oshkosh Brewing Company. Why did these men want to keep this hidden? Did it hurt their pride that they couldn’t make it on their own and had to join forces with local competition, or was it to have the element of surprise on their beer competitors in Milwaukee? Who knows, but they seemed bashful of recognizing the company they had formed.

Around 1900 the company adopted the logo of Chief Oshkosh of the Menominee indian tribe, for which the city of Oshkosh was named after. A giant emblem stood on the front of the building for many years and was saved from the wrecking ball in 1986. It is now on display outside at the Oshkosh Public Museum.

There were many breweries in the Oshkosh area in the 19th century. As time went on a few of the bigger and stronger ones remained. Alas, these local breweries met the same fate of the former ones. Trying to compete with the national breweries was a venture the local Oshkosh breweries had a rough time coping with. It is still amazing that my college town had itself a couple of notable breweries that stuck it out against Schlitz, Miller and Pabst down in Milwaukee. I would like to see an exhibit at the Oshkosh Public Museum to remember breweries of Oshkosh’s past. Maybe it can be a project I can work on with them in the future.