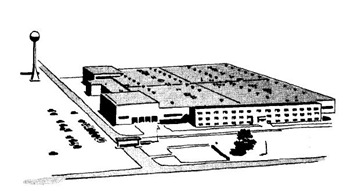 On December 1, 1952 the construction was completed, and the new facility was up and running. Due to some serious labor issues that riddle the construction projects, some of the military tools that were being set up for the production of jet engine components were taken out and never returned. The factory was expected to employ nearly 4,000 people, but that number only reach  700 some personnel. Military contracts for jet engine parts were cancelled and given to other firms.

In mid-1954 a $4,000,000 addition got underway to build an end on complex to create room for the production of switchgears, power transformers, circuit breakers and other non military products. Construction was completed around 1958. Allis-Chalmers was optimistic of its investment in the new facility, thinking that production would improve and the Terre Haute plant would be profitable.

Allis-Chalmers boasted that the Terre Haute Works housed the most modern equipment available for building and testing their transformers and circuit breakers. On top of that, they claimed that this new factory was keeping ahead “electric utility industry’s ever growing equipment requirements.”*

On February 9, 1962, Allis-Chalmers headquarters in Milwaukee announced that the Terre Haute Works would be shut down later that year. Management claimed that cost and price problems were to blame. Manufacturing that was taking place at the plant would be moved to both the Pittsburg Works & the West Allis Works and employees could be transferred to different plants upon request.

*Better Tomorrow Begins Today at Allis-Chalmers: The Story of a Great Company (circa 1950s)