If you have read some of my other blog posts, you can tell by now that I have a passion for the Winnebago County Courthouse. I work for the county maintenance department and it’s one of the buildings that I regularly work in. My supervisor, a super-awesome guy that cares about historical preservation as much as I do, has me working on polishing the brass in the building–cornices, mail chutes, elevator doors, door hardware, etc. We have also secured an original courthouse light fixture that was removed years ago. It will be going back up in the lobby where it belongs sometime in the near future.

I’ve gained somewhat of a reputation at work and with friends for being obsessed with the building. It’s such a beautiful building constructed during the Great Depression in the midst of a county-wide controversy–more on that later! It’s also one of the county’s best buildings, even if it has had some rather poor quality renovations over time. I enjoy walking down the halls and thinking about the process of building this mammoth structure. Thankfully, one county employee acquired a great album that gives us a glimpse of that!

A deputy that works in the courthouse was at an estate sale in the past year and found a photo album that contained 75 photographs taken on the construction site. I am not sure who originally took the pictures, but he or she captured some amazing moments. I am so thankful that the deputy shared this album with me. He was even generous enough to donate it to the historical society after I made some high-resolution scans for him.

I enjoy looking at the photos of the work site! Besides seeing the tools and machinery used to build this place, the strict safety practices on present day construction sites were nonexistent yet. There are no fences around the work area, nobody is wearing hard hats or fall protection, and workers walk on planks on the fourth and fifth floors with no railings. These men were just happy to be working in a time when jobs were hard to come by, and safety was the worker’s duty. The appearance of the men in the photo is fascinating, too. Most of them are wearing overalls, possibly made by Oshkosh B’ Gosh, and sporting a fedora or cap. There are a few pictures with “suits” inspecting the progress. I wonder who these men could be? Maybe they were county board members inspecting the work site, or the architects looking over the progress and double checking their designs.

The area of the building that is very interesting to me is the fifth floor. That was where the old jail used to be. That is the part of the building that has had the most renovations over the years. It is no longer a jail, and the only traces that I have been able to find of it being the jail are where there are still visible signs of torched steel bars that once fortified old windows. One photo shows a worker posed behind the bars as the jail equipment was being installed. It would be about a year after the photo was taken that the county’s criminals would be locked in the modern fortress on the fifth floor. 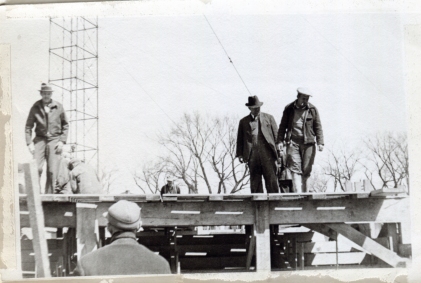 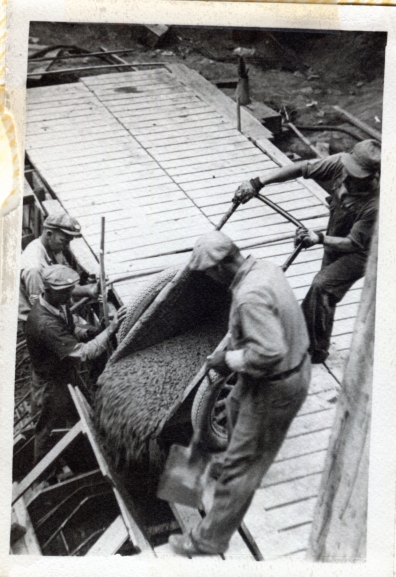 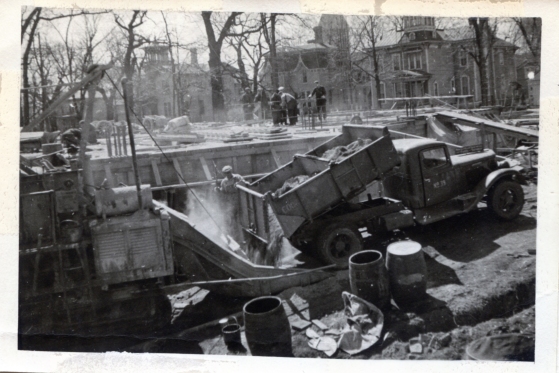 These photos are absolutely stunning. I plan to make the photos and others we have available online for everyone. Our historical society is working on cataloging our collections, and we plan to make them part of an online exhibit. I am always on the lookout for more photos and stories of this building. Please let me know if you have anything you would like to share!

Did you ever visit the courthouse in the early years after its construction? What are your memories? Was it as beautiful back then as it is today? Did you have a family member that worked on the project?