April 6, 2017, will mark the 100th anniversary of the United States of America officially entering World War I. The US was hardly prepared to fight a war in 1917. When war was declared, there were only 208,000 men in its standing army–80,000 of them were part of the national guard. Additionally, weapons and munitions were in short supply. Soon the American factories shifted to wartime production. Congress passed the Selective Service Act in May 1917 to bolster the US Military through a draft, which proved to be largely successful.  Nearly 2.7 million young men were conscripted into the army and about 300,000 volunteered.[1]

Out of the nearly 4.7 million men who served during World War I, the United States suffered over 116,000* casualties at the conclusion of the war.[2] Winnebago County sent off quiet a few of its sons  to fight in the trenches and on the seas, and some of them paid the ultimate price. Their names are forever immortalized on 4 bronze plaques that hung on the front of the Winnebago County Courthouse in Oshkosh. 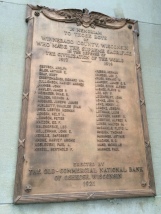 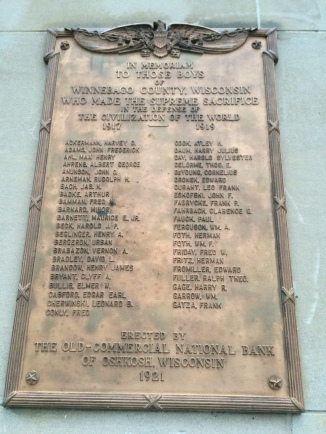 When I read the names, I had this realization that these men were more than just names on a plaque, or number on a casualty list. They were people who lived and worked in our local communities, and they have a story. I think that is what fascinates me the most. Who were they, what did they do before the war, and what propelled them into the first global conflict of the 20th century? I am going to attempt, hopefully with the help of others, to learn and share the stories of theses soldiers from Winnebago County who lost their lives in World War I.

While doing some reading on the subject, I stumbled into the movement to build a monument in Washington D.C. to honor our WWI vets. I was surprised to find out that we don’t have a monument there already! I included a video from the U.S. World War I Centennial Commission‘s website about their efforts to memorialize the servicemen of World War I in Washington D.C. I encourage you to see what this organization is doing to preserve our veterans’ history.