In a previous post I wrote about the establishment of Winnebago County, Wisconsin, and the construction of the county’s first courthouse. That first courthouse was a simple, two-story structure constructed in 1849. That building was outgrown shortly after completion, and county officials began discussing a plan to build a new facility.

According to one account, court was no longer held in the little courthouse after a new brick building for offices and record storage was built in 1854. Instead, court was held in various halls in Oshkosh that were available. Records were transported back and forth from the county office depending on where the session of court was held in the city. It was not a very practical system, and the citizen’s of Winnebago County clamored for a respectable building to hold court in.[1]

The county approved to build a new courthouse in 1859 and work commenced that year. The new courthouse was completed in late 1860 for a sum of $21,000. It was constructed in Greek Revival style using Cream City brick and stone and had a large dome at its center. The building’s dimensions were 60’ x 100’ and had three floors. The ground floor held the county’s prisoners in one half and the sheriff’s residence in the other. The other floors were used as offices and a courtroom. The people of Winnebago County finally had a proper courthouse that they were proud of.[2] 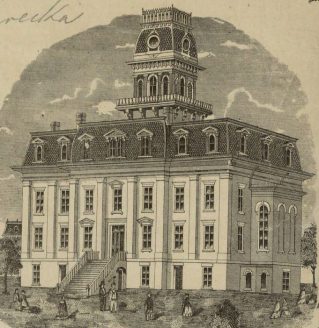 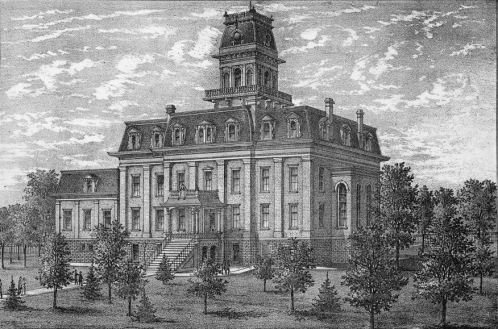 1875 East Wing Addition
After 12 years of use, county leaders decided on some exterior modifications to the building’s features. In 1872, the courthouse was transformed from its Greek Revival appearance to a Second Empire look. A tower replaced the large dome at the center of the building. The cornice was replaced with a mansard roofline that added a fourth floor to the building. The transformation cost an estimated $8,300.[3]

Three years later the county approved a $21,000 addition to the east side of the main structure. In 1875, the prominent Oshkosh architect William Waters worked with county officials and designed a 41’x50’ addition. The new wing created more jail space on the ground floor for male prisoners. The 2nd floor gave the building much-needed storage for a growing record collection and work space for county offices. The 3rd floor, or garret, held large water tanks that collected rainwater from the roof used for, as one Oshkosh paper said, “keeping the jail purified.”[4]

On April 28, 1875, Oshkosh experienced one of its most devastating fires in the city’s history. Around 1 o’clock on that dry, blustery day a fire broke out at the Morgan Brothers Mill sparked by embers from another factory’s smokestacks. In a matter of minutes, a raging inferno engulfed a large portion of the central city of Oshkosh, and the county courthouse lay directly in the fire’s path. Fearing the worse, county officials evacuated records from the building, but Sheriff Ebenezer Stevens, on the other hand, worked heroically to save the courthouse from burning to the ground. He recruited nearby people to form a bucket brigade and hoisted water to the building’s roof. Although the building caught fire a few times, the crew was able to successfully extinguish the fires that started. The fire raged on, but the courthouse was saved.[5]

Room was in short supply in the building again by 1884, so the county consulted with architect William Waters to plan an addition to the west portion of the courthouse. The addition, similar in size to the one ten years earlier, had a ground floor and two additional stories above. The ground floor had a residence for the sheriff. The first floor had fire-proof vaults for county records as well as a county courtroom, while the second floor had jury rooms. The project was finished in September 1885 and came in just under budget at $9,187.03.[6]

The jail facilities in the basement were no longer sufficient by 1899, and state officials recommended the county upgrade its jail facilities. County leaders went back and forth on whether to remodel the jail or build a new facility. It chose to build a facility and budgeted $25,000 for a new jail complex and sheriff residence. This was built on an adjoining lot to the southeast that was purchased specifically to build the new jail on. Although issues plagued the timely completion of the new jail, it was officially finished and prisoners moved in December 1900.[7]

By 1925, the courthouse was over 60-years-old and needed to be replaced entirely. County officials explored locations and costs to build a new courthouse and jail facility. It took ten years for the project to take shape, but I will save that for part 3 of the story. The new courthouse was completed in 1938 at its new location on the northwest corner of Jackson Street and Algoma Boulevard. With no use for the former building, the county accepted an offer from the City of Oshkosh to buy the property and buildings for $8,000. The transaction was finalized in January 1939, and the city took control of the property. A few months later, the county’s second courthouse was razed as part of a W.P.A. project to make room for additional parking. [8]

I’ve really enjoyed learning about this building. There are a lot of other little stories I would like to post about in the future–like the story of the cupola bell or the cornerstone contents during its razing! I was amazed to learn how this building’s outside appearance changed. Today the Court Tower Apartments occupies the lots where this magnificent building used to stand. It must have been amazing to see this once beautiful structure in person. They don’t build them like this anymore…