It is amazing what you run into when you least expect it. I just so happened to find the former Allis-Chalmers Appleton Works in Appleton, Wisconsin, last weekend. It was fate when I caught a glimpse of the  faded letters painted on the side of the factory complex. I started looking into this division of the company, and an AC friend of mine helped me out. He scanned me an article from a factory publication about the Appleton plant.

Before becoming the Allis-Chalmers Appleton Work, this factory was the Fox Valley Iron Works that was established in 1882. The company manufactured machinery primarily used for paper milling. Allis-Chalmers acquired the firm in 1959, and it became the Appleton Works in 1965. This new division gave AC a foot in the paper milling machinery market. AC stated that the Appleton Works built complete machines from start to finish. Other manufacturers built specific components for milling equipment, but AC built it all in Appleton. Whatever could not be built at the Appleton plant was built by other AC divisions. 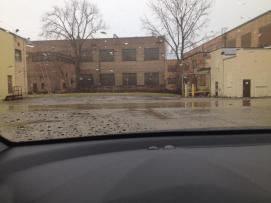