Thousands of Allis-Chalmers dealerships, stocked with orange tractors and machinery, dotted farming communities across the U.S. at one time. Markesan, my hometown, was also home to one of these dealerships. Although they sold other farm equipment brands, Allis-Chalmers was their flagship line of equipment. Some others included, Leyland, Same, Lindsay, New Idea, and New Holland.

The first dealership was located at 59 East John Street in Markesan. Elmer was actively involved in the business with his sons until 1963. He passed away 4 short years later in 1967. Raymond’s son, Tom, joined the family business in 1970. The family incorporated the business in 1977 (Wilde Implement Inc.) and built a new 60′ x 100′ shop on State Road 44 outside of Markesan in 1978. The new shop gave the family business the extra room and a much needed updated service shop. The grand opening of the new building was held on April 6, 1978, and the Markesan Herald reported this:

During the grand opening there will be movies and factory representatives will be on hand to answer that people may have. There will also be door prizes awarded. 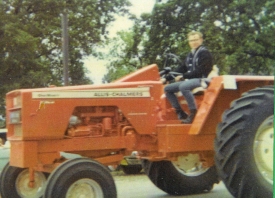 Raymond, Leslie, and Tom are said to have maintained a strong relationship with customers and family atmosphere with other employees. If a customer had a problem in the field on any given day or any given hour, the Wildes would drop what they were doing to help get the equipment running. I have talked to Raymond about his time running the dealership, and he said he can still remember how to fine-tune the Allis-Chalmers Roto-Balers. He said they would get frequent calls about the Roto-Baler, and that most of the problems were due to farmers leaving them out in the weather. He said he always took an oil can along to Roto-Baler service calls.

Sadly, the family closed the dealership in 1986. The trio found it increasingly difficult to operate the dealership in a time when economic troubles affected farming and other agricultural business. Raymond and Leslie were also semi-retired in 1982, handing a lot of responsibility over to Tom. Tom felt the pressure of finding good help to replace Raymond and Leslie, but also trying to maintain the family atmosphere at the dealership. Once in a while I come across some old dealership memorabilia, like the yardstick pictured above, or a tractor with the Wilde Implement decal on it.

What do you remember about Wilde Imp. in Markesan?