Who could have imagined that Wisconsin was once the leader of the U.S. hemp industry? What started off as an experimental cultivation in 1908 quickly turned into a thriving industry for Wisconsin. First off, I need to clarify a misconception about hemp. Hemp is not Marijuana, and it is not a psychoactive drug. Hemp is a variety of Cannabis sativa L that contains low levels of THC.  Some uses of hemp include food, fuel, oils, cloth, and plastics, among other things.

The experimental crops in Wisconsin were successful, and Wisconsin experienced stable growth in the hemp industry. Hemp was traditionally harvested using manual labor, but the introduction of mechanical harvesters was a boon to the industry. The Wisconsin Hemp Order was organized in Ripon, Wisconsin, on October 18. 1917, formed by hemp growers and mill owners to promote their industry.  That same year Wisconsin grew 7,000 acres of the 42,000 acres of hemp grown nationally; ranking second in acreage and production of fiber and boasting 70% of the county’s hemp mills. 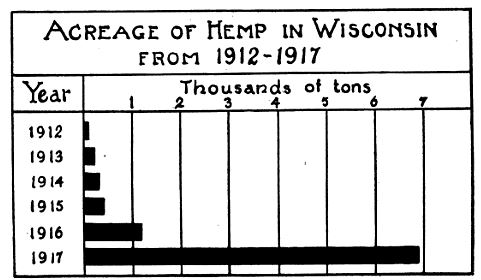 By 1918 Wisconsin became the leader in U.S. Hemp acreage and production. The majority of hemp activity centered in Green Lake, Dodge, and Fond du Lac Counties. Some of the state’s hemp mills were located in Markesan, Brandon, Fairwater, and Waupun, just to name a few. I would argue that these mills were at the center of the Wisconsin hemp empire, just by the concentration of them in the area. Matt Rens dominated the hemp industry in the area, which eventually gave him the reputation as the “Hemp King” of America.

World War I and II were boom times for the hemp growers and mills. The war effort demanded hemp fiber for rope and twine. When World War II broke out the United States was cut off from hemp it was importing. The government immediately pushed to get farmers and hemp mills producing the much-needed fiber. Wisconsin continued to be the top producer of the country’s hemp throughout the war. During this time, however, the U.S. government required growers to pay a tax to essentially gain permission to grow hemp.

The hemp industry in the United States did not last long after the war was over. A combination of many things brought the industry down, but the war on drugs dealt the final blow. Matt Rens’ mill closed in 1957, about 7 years after he died. His mill in Brandon was said to be the last hemp mill in the nation to close.

Recently, there has been a resurgence of the U.S. hemp industry. Colorado made history as the first state in 56 years to grow hemp. Maybe Wisconsin will see the day where it can, once again, become the leader of hemp. Do you remember when hemp was a prevalent industry in the area? Did you have family who grew hemp or worked in the mills? What do you think about states allowing hemp to be grown for industrial products again?