This past August my father-in-law planned a trip to the Holt & Balcom Logging Camp near Lakewood, Wisconsin.  To my amazement, it is the only logging camp in the United States in its original location and is on the list of National Historic Landmarks. The original building is now surrounded by the McCauslin Brook Golf and Country Club; however, it had very different surroundings over 100 years ago.

The logging camp operated from 1881 to the 1920s. Devillo R. Holt and Uri Balcom partnered in 1865 to form the Holt & Balcom Lumber Company.  In addition to the lumbering camps in Wisconsin’s lush White Pine forests, the firm also operated a sawmill out of Oconto, Wisconsin,and had offices in Chicago. Sometime near 1890 the firm was reorganized and renamed the Holt Lumber Company. One source said Holt bought out Balcom’s shares in 1888, while another said the partnership ended when Balcom died in 1893. Either way, the company was handed down to succeeding Holts until the company folded around 1940.

The logging camp building stands as a time capsule of Wisconsin’s once booming lumber industry. The camp has undergone extensive restoration in these past couple years, and the work has really paid off. In one end of the timber cabin is the kitchen, mess hall, and cook’s bedroom. On the opposite end is a bunkhouse with 10 beds for 35 men ( 3-4 men per bunk). 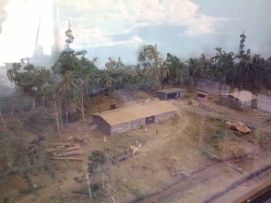 Model of what the camp would have looked like in the logging days. 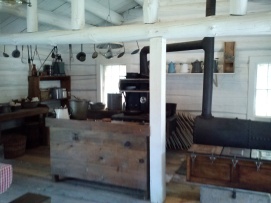 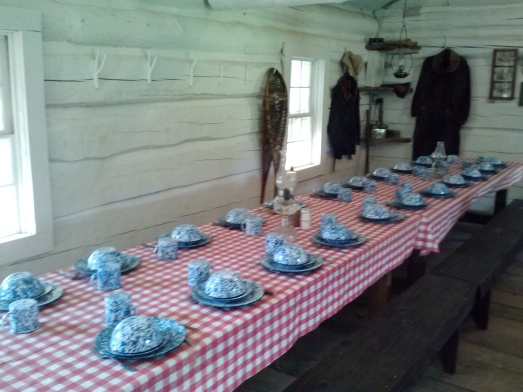 Life was not glamorous or easy for lumberjacks. Our tour guide explained that the men woke before the sun and did not return to camp until the sun set. The men ate  four meals a day to compensate for the roughly 6,000 calories they would burn in a day’s work. Logging was done in the winter months, while the ground was hard, and the logs floated down rivers or loaded on railcars for the sawmills in the spring. Most of the men in the camp were either immigrant workers or local farmers looking to make some extra money during the slow, winter months.

This logging camp is a fun, historic visit in the Northwoods of Wisconsin. Check out the museum’s page for information about planning your visit. Have you been to the H&B Logging Camp? What were your impressions of the building and its history?