The merger of E.P. Allis Company, Fraser-Chalmers Works, Dickson Manufacturing Company, and Gates Iron Works formed the Allis-Chalmers Company in 1901. Following subsequently after was the decision to expand the Milwaukee Works. The E.P. Allis Company was operating out of a dated shop near Walkers Point.

The company made an offer on 100 acres of land in North Greenfield located west of Milwaukee. The company bought the land in 1901 for $25,000.00 and began building the new factory complex. The area was renamed West Allis, presumably after the company that moved there. Ads in local newspapers said that West Allis would be the “iron manufacturing center of the Northwest.”

An article called “The Great West Allis Plant” in Machinery magazine gave the details of the construction of the new West Allis Works. The article said that the new factory was not built to meet the company’s present needs, but that is was built with the expectation of future growth and expansion on the grounds. Edwin Reynolds was credited with the insight to see that the company would need room to grow. Reynolds wanted to avoid a haphazard layout, so he designed the factory in units, or what the article described as “filing cabinets and book cases.” 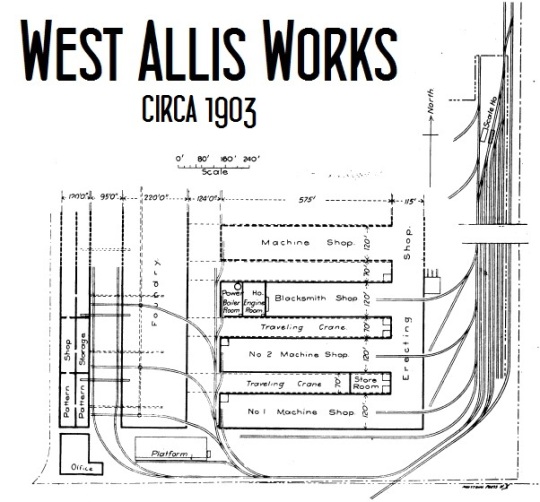 The foundry building, running north and south, was 220 ft wide and spanned approximately 535 feet with room to extend northward. The building was constructed with divided bays. The center bay stood higher than the two outside bays to allow sunlight to pour in on each side. The foundry was served by a railroad line to move material in and out of the yard. There were also a series of elevated tracks that ran adjacent to the foundry to help dispose of sand and other material.

Machine shops No. 1 & No.2 and the blacksmith shop ran east and west. Each approximately 120 feet wide and spanned 575 feet. Machine shop No. 1 had a 65 foot-wide central crane system with two cranes with a 80,000 lb lift capacity. The crane system in shop No 2. and the blacksmith shop were different from No. 1. The majority of the heavy work was done in shop No. 1 which contained the huge machining tools. The building’s floor plate was 24 feet wide by 200 feet long, and it was embedded in a thick slab of concrete. The massive portable machining tools were placed onto the floor plates. The floor plate was built to last a long time, but should it have fallen out of alignment, the floor could be adjusted and leveled by cranking on giant cast screws to bring the floor plate back into a level position.

Between the machine shops and the blacksmith shop ran transporting cranes to move equipment back and forth from the shops to the foundry. All of the cranes installed in the West Allis Works were built by Pawling & Harnischfeger of Milwaukee.  In the blacksmith shop were four steam hammers, the biggest had a 12,000 lb capacity. There was room left on the end of the blacksmith shop for the addition of a power plant and engine room.

The erecting shop was 115 feet wide and spanned 560 feet , north and south. The building was arranged into two bays, one with 25′ head room and the other with 60′ head room. The smaller bay was used to collect the parts and prepare them for assembly. The larger bay in the shop was utilized to assemble the massive vertical and pumping engines before final shipment.

Over the years extensions were added on to the original buildings, which is how they were designed.  More buildings were constructed elsewhere on the property to make room for the other lines of equipment Allis-Chalmers produced. The construction of the West Allis Works was the first step in solidifying the future for Allis-Chalmers’ ability to design and build the massive industrial machines that they did. Remnants of the old West Allis Works stand as a reminder of the industrial powerhouse the this company was.

4 thoughts on “Construction of the West Allis Works”